Types of Biases in Data

Types of Biases in Data

Even the unlikeliest possibilities can harbor data bias. And this can mislead data scientists to gather information with biased perspectives. When training AI and machine learning models, a biased dataset may have a skewed interpretation that doesn’t represent all the possible use cases in their entirety. This can lead to a systematic prejudice against a particular set based on stereotypes. This was exactly the case with Amazon’s AMZN.O, a machine learning recruiting engine that discriminated against women. It taught itself to favor men over women and downgraded resumes that included “women’s” and other similar terms. When we need to eliminate such gross errors in the machine learning models, we must first acknowledge the possibilities of data bias. 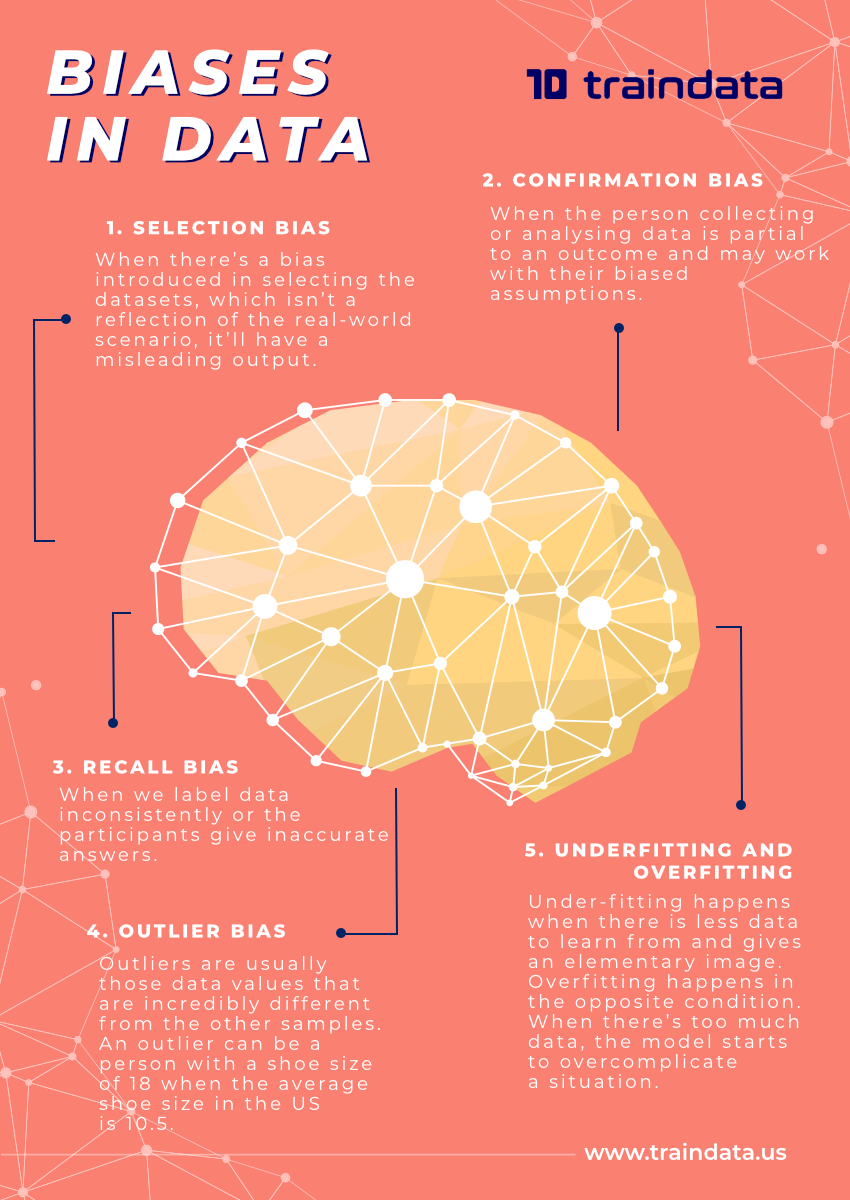 Understanding and Preventing Biases in Data

Data bias can affect an AI or a machine learning model right from data collection and labeling to analysis and reporting. Most of the data biases all stem from the way we collect and organize data. For example, a speech recognition model for a retail voice search engine needs to identify different accents, grammar usages, tones, demographics, and dialects. If any demographics are underrepresented or people with two dialects dominate our dataset, the model can make errors in recognizing voices of other dialects or demographics. Such gross errors can affect the entire performance of a model and lead to distorted outcomes. The key here is to collect data that are reasonably and equally represented by all variables in a model. While it isn’t possible to avoid data bias altogether, we can take preventive measures to minimize the possibilities and effect on the final output. Here are five common types of bias in data and ways to avoid them. 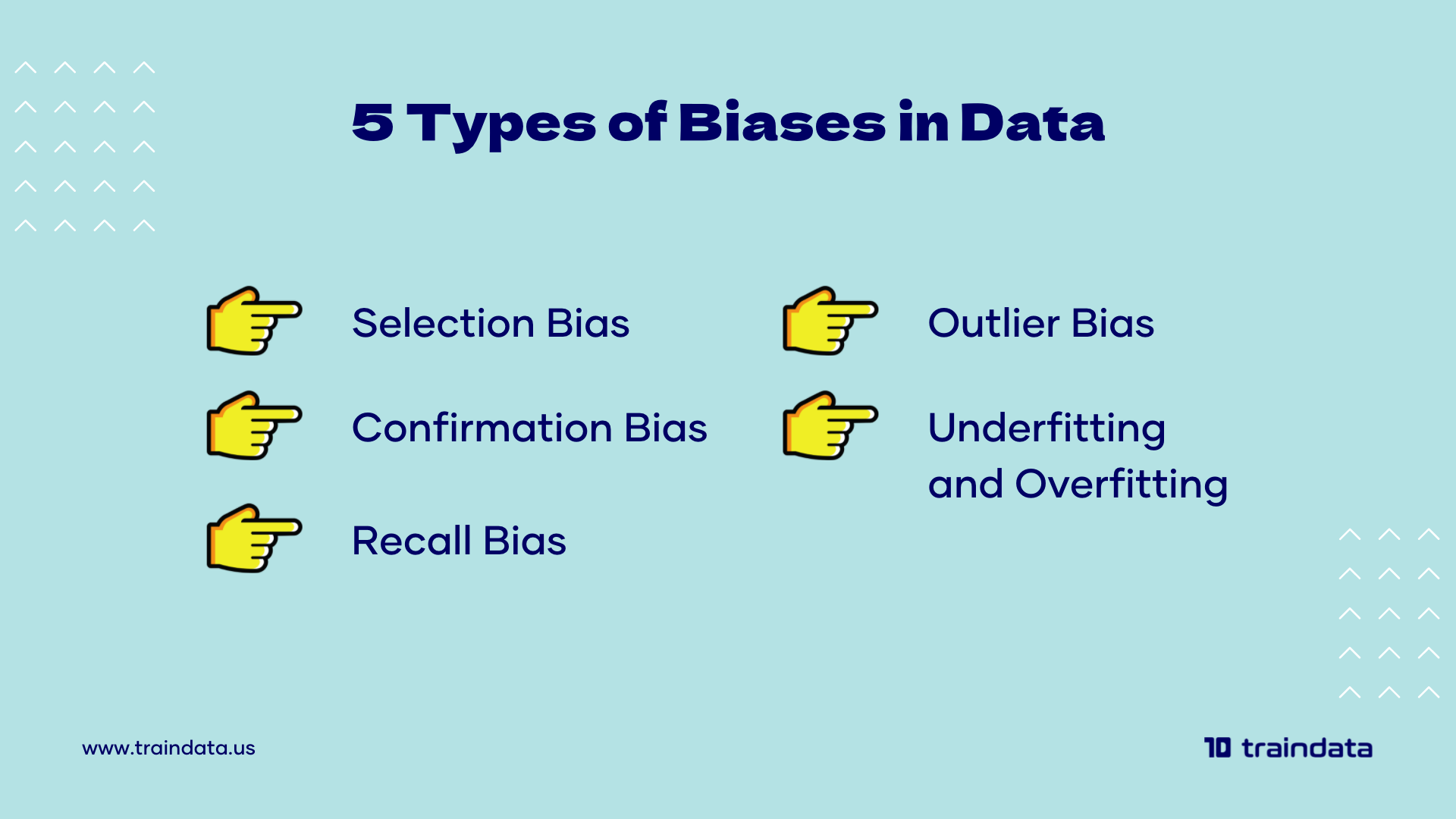 Every dataset has to be completely random — and we need to make that happen purposefully. When there's a bias introduced in selecting the datasets, which isn't a reflection of the real-world scenario, it'll have a misleading output. There are several types of selection bias. Even when we invite all segments equally to a survey, the final number of willing participants may be unequal. This is where data scientists need to make a conscious effort to equalize and represent all people similar to a real-world outcome.

A confirmation bias occurs when the person collecting or analyzing data is partial to an outcome and may work with their biased assumptions. It may happen consciously or subconsciously. Let’s say that a data analyst is working on a model that chooses between two product ideas. If the person is partial to one product, they may subconsciously favor that product over the other. This bias can only be fixed if the person takes an impartial stand and puts aside their personal beliefs when working on the model.

Outliers are usually those data values that are incredibly different from the other samples. An outlier can be a person with a shoe size of 18 when the average shoe size in the US is 10.5. Or a person aged around 90 years, when the median age of the participants is about 50. An outlier is essentially a data value that’s far-off from the median. And such outliers can affect the final output of the data analysis. We can identify such outliers by looking closely at the datasets and correcting the median.

Underfitting happens when there is fewer data to learn from and gives an elementary image. This is often noticed when we use non-linear data to create linear data models. Overfitting happens in the opposite condition. When there’s too much data, the model starts to overcomplicate a situation and reach an analysis that may not be true for the major cases. We can solve both by removing the noise and feeding only the accurate data to the model that’s just sufficient enough to conclude.

Data scientists and data analysts need to understand the probable data biases and validate the outcome of a data model. This is best achieved by analyzing the different ways an AI or an ML model can be inadvertently biased and taking steps to prevent them. At Traindata, we have expert data annotators and labelers with over 15 years of experience working on ML and AI projects. We’re skilled at collecting reliable and relevant data, identifying common biases, fixing them, and training any model to provide accurate results. Please email us at [email protected] to talk more about project needs.